A few weeks ago, I wrote about the different types of religious congregations that help make up the Catholic Church. Writing it was like spiritual therapy because for years I have been discerning where my spiritual talents could be most useful, which Saint could mentor me towards earning my heavenly crown and those of my family.  St. Francis? Our lady of Mount Carmel?  St. Dominic? St. Ignatius?

Today, I am pleased to announce that the Big Therapist in the sky has astounded me once again with His wisdom.  Upon praying the rosary, a sense of belongingness that was silently coaxing me towards a particular religious charism shone through… and it came in the most peculiar way:

This is my rosary.  It was a birthday gift from my wife that I received back in 2010. 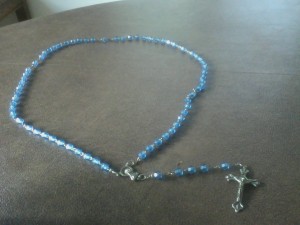 Did you notice something different about my rosary?  It has six decades.

Why? Wouldn’t that anti-liturgical?  Truthfully, I don’t know.  I’ll let you battle that out in the combox.

I learned how to pray this sixth decade from a very lesser-known religious congregation called the Christian Brothers.  They are consecrated laymen who vow poverty, chastity and obedience to the superior Brother (not a Bishop) who then answers to the Pope.  They are teachers and dedicate their bodies and souls to the ongoing construction of the God’s Kingdom as teachers.  Since I am a teacher, I gravitated to their founder’s spirituality.  St. John the Baptist De La Salle, while not very well known in the U.S. is worldwide thanks to his Brethren.

Back to that sixth mystery. It turns out that the Lasallian rosary is always prayed with a sixth decade which bears no evangelical mystery.  Instead, it is prayed to strengthen the community through consecration to Mary and her Son, Jesus.

“The sixth and final decade is dedicated to the Lasallian community which I love so very much.”

These are the words I’ve recited thousands of times prior to beginning my secret sixth decade.  Now, it is not longer a secret.  I am Lasallian.

Here are a few problems with that:

The closest Lasallian community is located 3 hours away from me so I can’t be considered an “official” part of their community.

The Lasallians have no “Third Order”, so there is no real enrollment into the community besides what we experienced while serving with them as missionaries.

Finally, almost nobody knows who they are in the U.S. which makes it hard to connect with other Lasallians.

And so, I have no real merit in saying I’m lasallian, but I sure as heck hope that merit is earned by living as one.

What about you?  Have you ever had a calling to serve but couldn’t realize it?  Do you have a secret prayer that is hooking you up with some extra graces?